Thoughts on the Future of Windows Phone

From May through September of 2014, I used a Nokia Lumia 521 as my only phone, and it was through this experience that I became a fan of Windows Phone. For reasons outlined here, I switched back to Android, purchasing a 2013 16GB Moto G for use as my primary phone, my Lumia thus relegated to occasional use for photography as well as for experimentation with Windows 10 Mobile. Even as I am again primarily an Android user, I still have a soft spot in my heart for Windows Phone. I enjoy the simplicity of navigating around the operating system, the usefulness of the Live Tiles, and the stellar Bluetooth integration with my car. I sometimes think about replacing my Moto G with an unlocked Lumia 640 or maybe the 550 when it comes out later this year. Yet, I am hesitant to move back to Windows full time, as Microsoft's actions - not what they say, but their actions - make me question the viability of the platform going forward.

Let's face it, Android and iOS are of course the 800 pound gorillas in terms of market share in the mobile space, and Windows Phone, with its late entry into the market, has always been a distant third, edging slightly ahead of the failing BlackBerry platform and a number of also rans like Firefox OS and Ubuntu. Even so, there is a small but ardent Windows Phone fan-base. Think about this for a moment. No one would argue that the Mac (and OS X) should not be considered successful, even with Windows dominating the desktop/laptop market. Windows Phone is similar to Mac OS X in that regard. They both have differentiating advantages from their main competitor, they are both easy to use and manage, things "just work", and both platforms have zealous fan-base.

But even if market share doesn't matter to most Windows Phone enthusiasts, it definitely matters to everyone else. Developers are still hesitant to write and maintain apps for Windows Phone because of the low market share and low return on investment. Customers are hesitant to invest in a platform with a dearth of apps.

Market share also apparently matters to Microsoft. As such, it should not come as a surprise to anyone who follows tech news that Microsoft has now written off their entire Nokia acquisition, and there have been many rounds of layoffs from the former Nokia division. To exacerbate the issue, Microsoft has not issued a flagship phone in quite a while, instead, flooding the market with low-end and midrange models that are almost indistinguishable from one another. While at first I applauded their effort to focus on the low and midrange ends of the market, it turns out Microsoft needed at least one aspirational model. They simultaneously removed key features from those low and midrange models that they flooded the market with, features that once distinguished them from the vast sea of low end and midrange Android phones out there, such as the dedicated two-stage camera button.

As the Nokia/Microsoft Lumia line of phones make up the vast majority of Windows Phones in the market, Microsoft’s CEO, Satya Nadella, has attempted to reassure the Windows Phone fanbase that despite the Nokia write off, Microsoft will continue to make phones that run the Windows operating system (Windows 10 Mobile), and Microsoft introduced the Lumia 950 and 950XL as the company's two newest flagship devices. Nadella also said Microsoft would release fewer devices, with a greater focus on making the devices that they do manufacture great, as opposed to releasing a bunch of new low-end Lumias each month that are almost indistinguishable from the models released in prior months. This new, more focused strategy makes sense. It worked for the Surface after all. Microsoft retooled the Surface Pro 3, and created a new category of a tablet that really could replace one’s laptop, causing Apple to now even include rudimentary multi-Window capabilities in iOS 9, just to keep the iPad competitive with business users. Speaking of Apple, upon Steve Jobs' return in the late 90's, Apple also narrowed their product range with great success. Jobs killed the Mac clones and drastically reduced the number of models produced. Motorola has also seen success with refocusing on a smaller, more focused lineup with their Moto E, G, and X phones.

However, even with this narrowing of focus, Microsoft has not addressed the thing that will ultimately kill Windows on phones - there is no longer a compelling reason to buy a Windows Phone. Let me explain. When Satya Nadella took over as CEO, Microsoft began the process of moving away from being a “devices and services” company to having a “mobile first, cloud first” direction. While at first “devices and services” and “mobile first, cloud first” sound a heck of a lot like the same thing, they are in fact vastly different approaches. Under the “devices and services” philosophy that was championed by the previous CEO, Steve Balmer, Microsoft wanted customers to first and foremost use Windows. Their “devices and services” philosophy was really just an extension of their “a Windows PC on every desk” mantra from the Bill Gates era. It used to be that if you wanted to use Office on a phone, you had to get a Windows Phone. Now, Office is available for free on iOS and Android, and those apps are better than their Windows Phone counterpart. In fact, under Nadella, Microsoft has gradually released most of their first party applications that were previously only available on Windows to iOS, Android and the web. Heck, even Cortana, which was a huge selling point for Windows Phone, is now on Android. Granted, Cortana does not have the hooks into the underlying OS on Android that it does on Windows Phone, but nevertheless, most of the functionality is there. 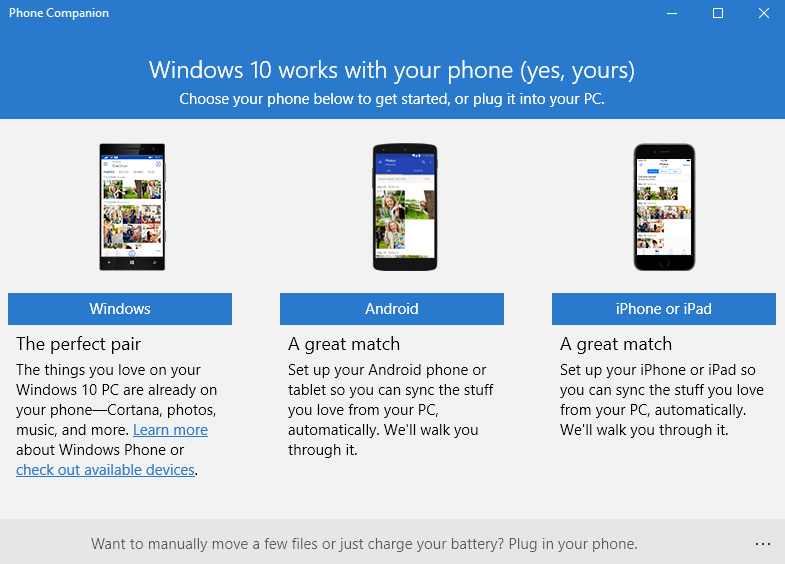 I get why Microsoft is doing this. Given the low market share for their mobile devices and the fact that mobile is now a much bigger market than the traditional PC market, they are trying to get their apps and services used by as many people as possible, and what better way to accomplish that than to make them available on the two biggest mobile platforms. However, if a consumer can have all of the Microsoft apps they want on Android or iOS, and they can also have the vast library of apps offered by the Google Play store or the Apple App Store that using Android or iOS gives them, why on earth would they even consider a phone that runs Microsoft Windows? Live Tiles? No. Seamless integration between their Windows phone and Windows 10 PC? Maybe. Continuum? Maybe — but at this point it seems to be a very limited use case that would be interested (or actually use this).

Microsoft wants to put their services where the users are, and it makes sense. However, the Windows Phone fan-base at large may need to start to consider whether they want iOS or Android in the future. They may not need to decide this tomorrow, but the time will soon come when Windows Phone will no longer be an option to consider.