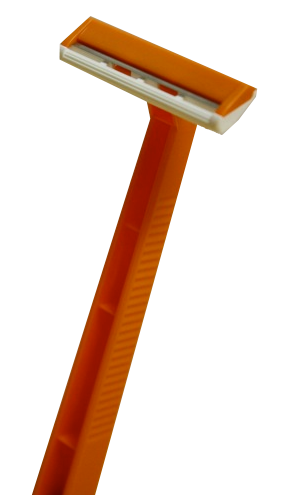 I hate shaving. Nevertheless, if I want the privilege of kissing my beautiful wife, shaving is a necessary evil. So, I shave - usually every other day, or whenever Brandy reminds me, which ever comes first.

One of the problems with shaving is that the equipment sucks. I have tried expensive shaving gels, cheap shaving cream, two-blade razors, four-blade razors, five-blade razors, and three-blade disposables, all with the same result. These types of razors, especially the the ones with three, four and five blades, often get clogged. This renders them pretty much useless. There might be five blades on that expensive razor, and one would think that the more blades a razor has, the better (closer) the shave the razor would provide. As the quantity of blades requires that the blades be fairly close together, when I shave with one of these razors, it seems like I spend more time unclogging the razor than actually shaving. It just so happened that I found an unlikely solution to this problem. I was at my parent’s beach house a while back, and I had forgotten my razor. Fortunately, they had one of those cheap, plastic, single-blade disposable razors, and it just happened to be unused. You know, the kind that Bic developed in 1974.* I was a little skeptical at first as to how close (and/or cut free) my shave would be, but as I began to shave, I noticed that the cut was very close. Additionally, the razor was extremely easy to unclog, since there was only one blade. I have been using single blade razors ever since. I think these more expensive, multi-blade razors may just be gimmicks.