"Ink is a canvas for instantly capturing a rough sketch or back-of-a-napkin idea. The only features are smooth ink on soft paper with built-in sharing."

Upon launching Ink, one is presented with a blank canvas with a small button in the bottom right corner that initially bounces a bit to provide a subtle hint that it is actionable. By double tapping this button, one is presented with a menu that will allow one to save their picture to the camera roll, email it, or clear the canvas entirely. By swiping up on the button, one's drawing is automatically saved to the iOS camera roll, provided that permission has been granted though iOS. The app is insanely simple, and as a person who loves to doodle, this app gets quite a lot of use. 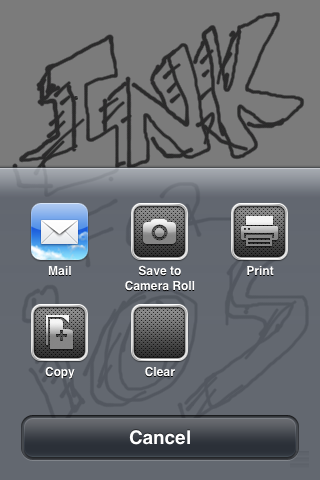 The folks at Minimal Tools should be applauded for this app, not only for its simplicity of use, but also for its effective and appropriate use of skeuomorphism. Skeuomorphism not only embodies the use of real world user interface elements (more popular/infamous examples include but are not limited to Corinthian leather textures and yellow legal pad backgrounds), but also real world behaviors. While I generally abhor skeuomorphic user interface elements, I am typically fond of skeuomorphism that mimics real world behavior, provided it is done in the appropriate context, and to that notion, Ink really does embody the sense of using a pen on a napkin or piece of scratch paper. If one makes a mistake with a real life pen and napkin, one has two options, throw the entire thing away, or work around it. The same applies with Ink. One can double tap and clear the screen (throwing it away) or just keep drawing around the mistake.

Ink is wonderful, and if you are a doodler, I suggest you go download it right now. It's currently free in the App Store