I have come to the realization that it really does not matter which operating system you prefer or use. Whether you use some flavor of Linux, Mac OS, Chrome OS or Windows, or whether you prefer Android or iOS (or even the now defunct Windows Phone), most modern operating systems offer similar features and are essentially just the vessels upon which you access online applications and services. What really matters is that you use what works best for you.

With that said, for a number of reasons, the main one being coverage related, my wife and I recently made the decision to switch from T-Mobile to Verizon. Unfortunately, as a result of this decision, I found myself in need of a new phone, because my Nextbit Robin was unable to support the necessary frequencies to be able to be used with Verizon. I carefully weighed the pros and cons of a few different handsets that Verizon offered, but ultimately, I made the decision to get the iPhone SE. So far I am happy with my decision. Here’s why I feel that the iPhone SE is right for me.

Getting back to a more compact form factor...

Speaking of that classic form factor, the build quality of the iPhone SE is second to none. With its all-alluminum frame, the iPhone SE provides the perfect balance of solid construction and light weight. The buttons have a solid click, as opposed to other devices at that price point whose buttons feel plasticky and cheap. I chose the “space gray” finish. I thought briefly about getting the silver finish, but the “space gray” model is the only one with an all black front. 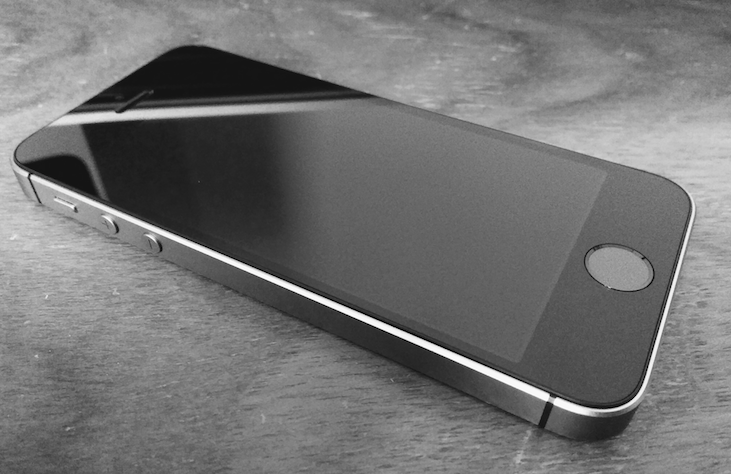 Just because it's small doesn’t mean it should compromise on performance.

Even though the iPhone SE may be small in stature, unlike most smaller form factor phones from other manufacturers, Apple did not skimp out on the internal specs. The iPhone SE's internals are a Frankenstein of system components from the iPhone 6s and 6s Plus, which were Apple’s flagship models when the iPhone SE was released back in March 2016. All three devices sport the same 12MP camera and can record 4K video. They all sport Touch ID for Apple Pay, a 64-bit A9 chip, 2GB RAM, and 32GB of base storage. Even through the SE has a 4-inch screen, as compared to the 4.7-inch, 326 pixels-per-inch displays of the iPhone 6s, 7 and 8, the display of the SE maintains that same 326 pixels-per-inch, rendering text on the screen of the SE just a bit sharper. The SE does lack “3D Touch”, but that is okay with me. Coming from Android (and Windows before), the long press, which is essentially what 3D Touch is, is not a feature that I particularly miss. The 6s Plus does have a better camera than that of the SE, as the 6s Plus adds optical image stabilization. While the iPhone 7 and iPhone 8 do bump the specs up in other areas somewhat, those phones don’t offer the smaller form factor that I desired, and the slight bump in specs certainly doesn’t justify the price difference.

After about a month’s worth of use at this point, I can say that the specs of the SE still hold up today, even with iOS 11. This phone actually performs better than my Nextbit Robin performed. Network connectivity is faster, and I rarely experience any slowdowns or hang ups. This phone, unlike my Robin, has not crashed on me yet (knock on wood). That said, I eagerly anticipate iOS 12, as I hear that it will bring lots of performance improvements for older devices.

But wait… I thought you were this hardcore Android guy?

Don’t get me wrong, I still really like Android, and I feel that Android is an extremely powerful operating system. Google got a lot of things right. However, some of the things that make it great, such as its open source nature and the fact that it can be freely used and modified, also make it a huge pain for the end user. As I previously stated, I carefully weighed a number of offerings from Verizon, but ultimately came to the decision not to pick up an Android phone from Verizon because of the vast amount of carrier bloatware that comes pre-loaded on most of those devices. My son picked up the Moto G6 from Verizon, and he is happy with it. He does not mind the carrier bloat, he's a pretty technical teenager, and he disabled all of the pre-loaded carrier apps that he could. He’s also vehemently anti-Apple. However, the idea of having carrier placed apps that one cannot remove entirely, only disable, rubs me the wrong way on principle. I know that this can be solved by going the custom ROM route, and I have used a custom ROM with every Android device I have owned. However, I did not want to go through the hassle, and now that I use my phone for work, I wanted reliablity. I could have also gone with an unlocked phone that works on Verizon's network. This also removes the carrier bloat issue. However, it seems like these phones are few and far between. I really like OnePlus and Nokia, and if either of them had a phone that works on Verizon's network, I may have gone that route. My eldest son uses an unlocked Moto G5 Plus. He's super happy with it. I still may go the unlocked phone route in the future, but the reality is, I really felt like giving the iPhone another shot.

What about the Pixel 2?

Verizon does in fact offer the Pixel 2. The Pixel 2 is essentially Google's version of an iPhone. It is Android as Google envisions. Updates come straight from Google, just like an iPhone. The Pixel 2 probably still has the best camera in the industry. Or, I could have probably still picked up a used first generation Pixel. Either way, getting a Pixel would solve the carrier bloat and any long term operating system update problems. Truth be told, I simply did not want a used phone, nor did I want to spend the kind of money that the Pixel 2 costs. Notice I chose not to buy an iPhone 8 or X as well. Plus, more important than cost to me was a smaller form factor. So I guess it really came down to a smaller form factor, a desire to try an iPhone again, and cost in that order. 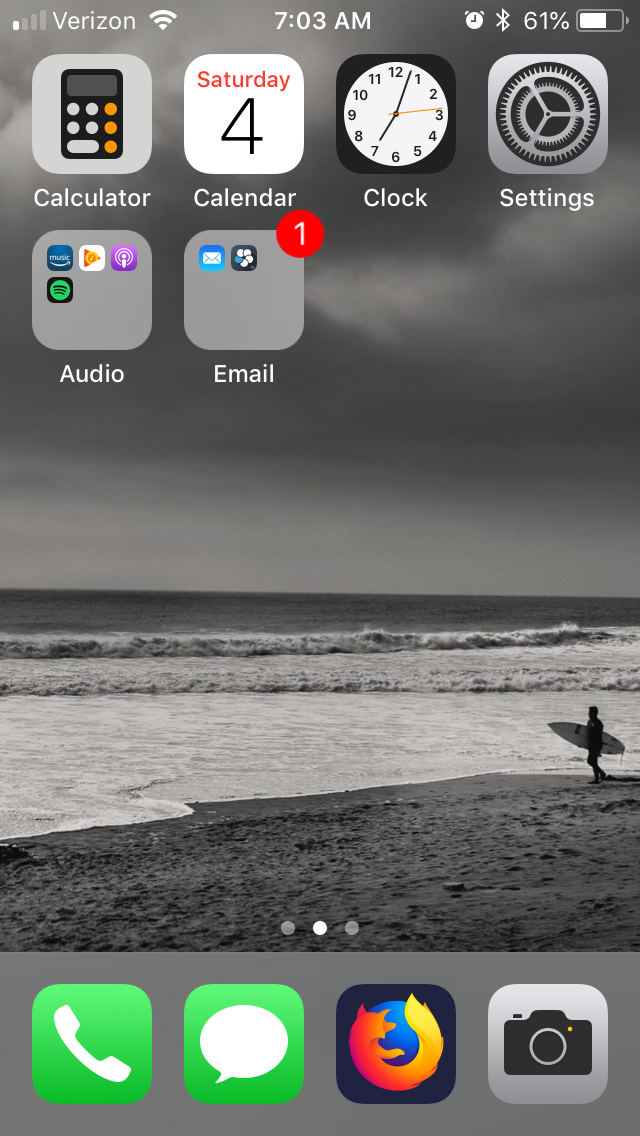 So you've joined the Dark Side. How's iOS?

iOS is not that bad. There are definitely some things I miss about Android, but iOS is growing on me by the day. It kind of just gets out of my way. As crazy as this may sound, I have actually been mostly using Apple’s stock apps. I’m using Mail to sync all my email accounts, as well as regularly using Reminders and Maps. Apple Maps is really not that bad. I do have some third party apps installed, like Blackberry Work and Google Keep, and full disclosure — I removed the iTunes Store and Apple Music from the device, instead opting to continue using Google Play Music, Amazon Music, and Spotify. Even though I know that there are better third party podcast apps out there, I have a soft spot for Apple’s Podcasts app. I essentially replaced Safari with Firefox. I say essentially because you cannot “fully” replace the default browser in iOS yet. However, since Firefox is my browser of choice, it takes up residence in the dock.

For as much hate as people give Siri, I actually find “her” to be not that bad. Siri will play news for me, send texts, read my unread texts, play podcasts, set reminders, and more. In fact, Siri seems to be able to do anything I regularly did with Google assistant or even Cortana when I had my Windows phone. Siri even works better hands free over Bluetooth in my car. However, unlike Google Assistant, Siri is not creepy.

I was very annoyed by my Android phone, as it constantly tracked where I went. The tracking part in and of itself is fine with me, as that is how things like location based reminders happen, but the constant and annoying notifications, pestering me to rate my experience at places I was simply passing by had gotten out of hand. My experience with this was similar to that of Dave Rupert's. I had even at one point de-Googled my Robin, removing all of Google’s apps except for the Play Store and replacing them with Microsoft’s or just using the AOSP version.

Honestly, the more I use iOS, the more I miss Windows Phone. Windows Phone really was the happy medium between iOS and Android. I am sad that it never caught on with developers, and as such consumers. I am sad that Microsoft finally gave up on it. I think it was the best of the three operating systems, but at the end of the day it was Microsoft's Betamax to the VHS of Google and Apple. Again, iOS is way better than it used to be. However, I am hoping that when the time arrives to upgrade from my iPhone SE, a true third party competitor to Android and iOS emerges. There are rumblings that Microsoft may get back into the game. Maybe the success of the Surface Go and continued interest from the fans will prompt them to announce and release the long awaited Andromeda device? Maybe the Librem 5 will take off? Who knows? For now, I am going to enjoy my iPhone.