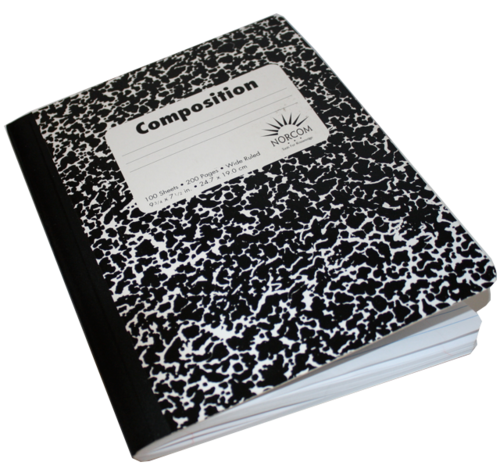 I firmly believe that a good task management system is one of the keys to great productivity, and I’ve thought a good deal about organization, specifically, simplifying my workflow and the tools I use to manage my to-do list. Ultimately, after a lot of thought, I have decided to stick with the tried and true method I have been using for the past year or so - an analog task management system (which is just fancy talk for a notebook and a good pen). I’ll go ahead and worn you right now, this topic can be boring to some (or most) people. However, for those interested in organization and task management, by all means, keep reading.

In the past, I have tried many ways to record and organize my to-do list. One of the first things I tried was the combination of MS Outlook (2003 and later 2007) and a Blackberry Curve. The result was less than spectacular. Synching my to-do list over the air between my Blackberry and Outlook was convenient, but I did not like the fact that my to-do list was tied to an electronic device that was subject to the whims of whether or not Outlook would cooperate with me. With good intentions I diligently used the task management feature built into Outlook. I would flag emails and set pop-up reminders, but unfortunately, those reminders would always seem to get snoozed or even just ignored in their entirely. Not to mention the fact that I cannot stand Outlook’s user interface.

Next, I tried other programs. I tried to use a plain-text file, appropriately named, “To_Do.txt”. That became an unwieldy nightmare pretty fast, as marking things complete and finding things became a chore. I tried a version of “To_Do.txt” in Wordpad as an RTF file to no avail. I also tried a “smart” Excel spreadsheet of my own creation. With the spreadsheet, I had more control over the interface of my to-do list, but I ultimately abandoned the project, as it became too much to maintain. Additionally, these two options lacked the ability to access them when I was offline.

Ultimately, I decided to go the analog route, whereby I would keep my to do list offline. For a while, I used a simple legal pad (almost always a white one, since I hate to look at the yellow legal pads for too long). While being able to write, scribble, and doodle in my to-do list was, to me, a distinct advantage of an analog system, there was just something that was not very intuitive about the legal pad. It was hard to quickly flip through the pages, the large size of the legal pad was not conducive to portability (at least that is my opinion), and inevitably, the pages would simply fall out.

One Monday morning in September 2008, I came across Bill Westerman’s GSD system, and after reading his inspirational article, I immediately headed out to grab a notebook of my own. In my opinion, Bill’s system is great. It is not overly complicated, and it is easy to maintain. (Not to mention the fact that a real notebook cannot crash and leave me disconnected from my thoughts.)

Bill uses a Miquelrius (or at least did when he wrote his original article) notebook, and I have seen others choose Moleskins and other leather-bound journals of that nature. I ultimately decided on a plain old composition book. Why, you may ask? 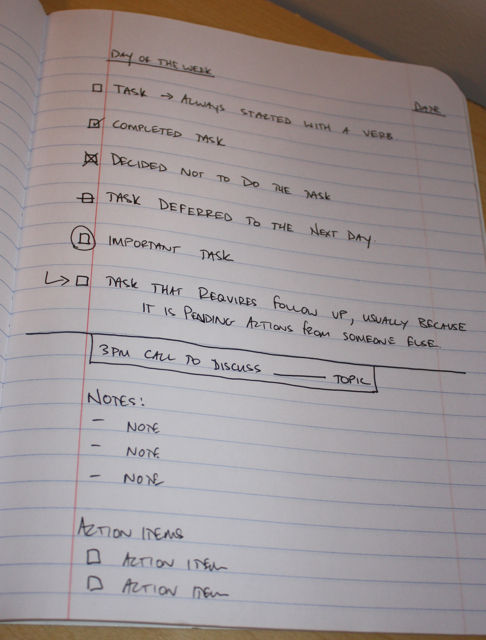 Like Bill, I start out each day with a fresh page in the notebook, and I jot down the tasks that did not get completed from the previous day. The picture above shows a quick and dirty legend of what the different symbols mean. After I have transferred a non-completed task to the current day, I draw a horizontal line through it on list item I made on the previous day. Re-writing my tasks each day may seem like a lot of extra work, but not only does it keep the tasks fresh in my mind, it also helps me to weed out the BS. For tasks that I ultimately decided not to do for whatever reason, I simply cross them out with an X.

As I work throughout the day, I jot down any new action items I come up with, but generally only if it is something I cannot immediately do. As I complete tasks throughout the day, I simply place a little check mark in the box beside the completed task. Sometimes I make a note or two in the margins. If something is really important, I circle it. I usually start the day by circling the three or four most important things I want to get done that day.

I also use my notebook to take detailed notes during meetings. The nature of my work has me in lots of meetings over the phone and using Live Meeting. In some meetings, I am an active participant. In others, I find that I am just listening for key things with regards to my role, and/or organization. For the latter type of meetings, I have found that taking notes keeps me more focused.

So there you have it folks. I have found that using a plain old composition book and following a slightly modified version of Bill Westerman’s GSD method has allowed me to increase my productivity and keep myself more organized.

Return to The Art Directed Journal