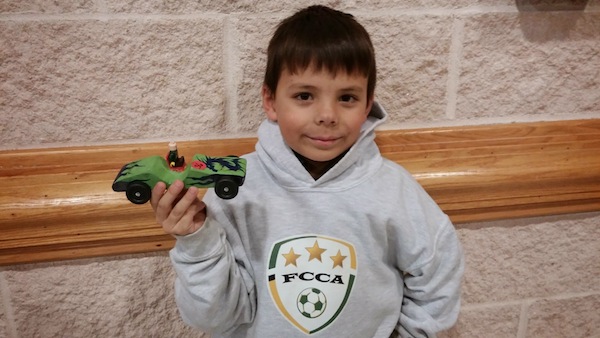 One of the things that Cub Scouts look forward to is the annual Pinewood Derby. This year marked the second Derby for our youngest son, Luke. We all had a fantastic time. Read on to find out more about our experience at this year's derby. 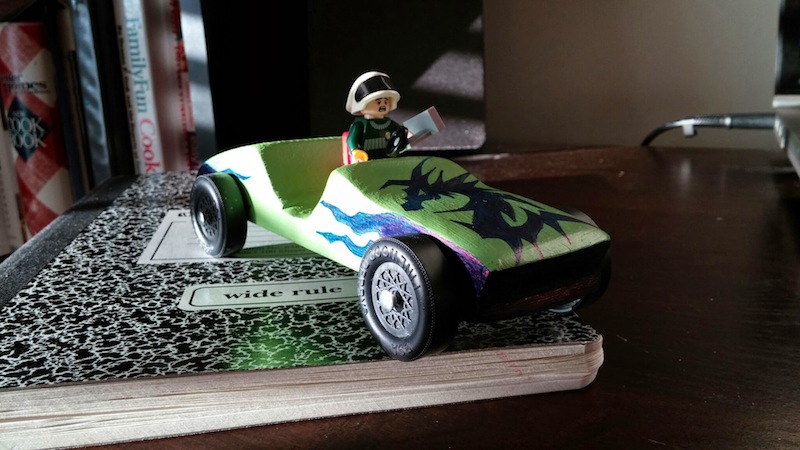 This was Luke's car as it looked before check-in. Pinewood Derby has a number of rules, one of which is that the car cannot weigh more than 5 oz. Luke picked his design, his color scheme, and he decided that he wanted a dragon on the hood, flames on the side, and a Lego man sitting in the car. The Lego man is supposed to look like he is freaking out because the steering wheel broke off. 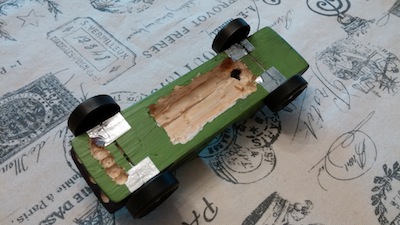 After originally weighing in at 5.3 oz, I had to reduce weight by pretty much cutting out the entire bottom of the car. I finally got the car down to 5 oz. 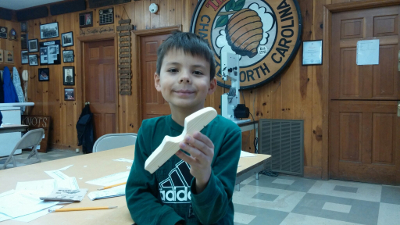 Here is Luke at Pinewood Derby workshop #1 after we had cut his car. Pinewood Derby cars start as a solid block of wood. It's actually a kit that comes from the BSA.

As I was shaving all that weight from the car, I inadvertently broke one of the spaces that holds the axle for the right, rear wheel. So, I did what any reasonable person (who by the way sucks at building Pinewood Derby cars) would do. I super glued the wood back on, inserted the axle, had Luke test the car after the glue had dried, re-weighed the car to make sure the extra glue did not put it over the 5 oz weight limit, and checked the car in for the race the next day.

We arrived the next day, ready for the race and ready to have fun, but there was a slight problem. The place where I had super glued the night before did not quite get dry, and the glue had leaked down into the axle and wheel, causing the wheel to lock up. We quickly had to unstick the wheel (we ended up pulling off the glued one and replacing it with a new one). Once that crisis was averted, we re-checked the car. Unfortunately, by the time that we were finished with all the McGuyvering on Luke's car, it looked less like the British roadster it was intended to be and more like a rat rod.

Luke's car was not the fastest, but it made it down the track in one piece. His car did not win any design awards, although it surprisingly got a couple of votes for best design. When all was said and done, Luke had fun, and that's what matters most.

Luke with his grandfather during the event