A Few Thoughts on Using my Ten Year-Old iMac 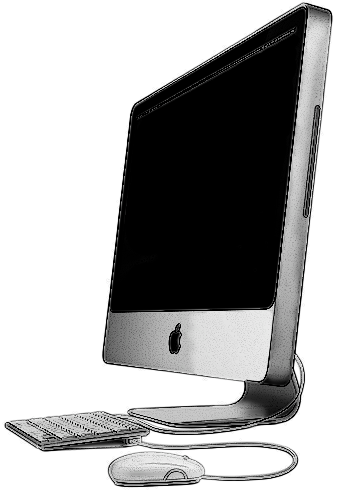 In 2008 my wife and I purchased our first (and only) computer made by Apple — an iMac. It was a significant investment at the time, our goal being to get at least six years of use out of it. It has served us well as our family desktop, and I am happy to report that even ten years later, our iMac is still keeping on keeping on.

But even though it is still “keeping on keeping on”, how does an iMac circa 2008 actually hold up in 2018? Surprisingly well, actually, as long as you don’t expect Porsche level performance. Our iMac, which sports an Intel Core 2 Duo processor and the original hard drive, runs OS X 10.11.6 (El Capitan), which is the last version of Mac OS that will run on this device. Due to the aging hardware running newer software, the iMac is a little slower than it used to be. However, aside from tasks like editing video, which is painfully slow, our iMac handles most every day computing tasks, such as browsing the web, watching video, email, messaging, listening to music, front end web development and even some light photo editing using GIMP, just fine, provided you don’t try to do more than a couple of these tasks at once. Since I don’t multi task too often on our iMac, nor do I use any virtual machines or play games on our iMac, the aging hardware is not that big of a deal to me.

Apple truly built a solid device. The only thing that I have had to do to the iMac in its ten years is add more RAM. In theory, this thing could run until the hardware gives up, and even then, it is not unheard of to replace various internal components. However, my only reservation about this machine at this point is the security updates. For now, this last version of OS X is still receiving fairly regular security updates. However, I do not know how long Apple will continue to provide security updates for this version of OS X. Mac OS 10.12 (Sierra — 2016) and Mac OS 10.13 (High Sierra — 2017) have come out, making OS X 10.11 two versions behind. When Mac OS 10.14 (Mojave) is released later this year, I am concerned that the window for security updates for 10.11 may be coming to a close, based on Apple’s track record. Truth be told, I would still be running Snow Leopard on this machine if Apple and other third party developers would support it, as Snow Leopard was amazingly fast, stable, and was certainly my favorite version of Mac OS to date.

Ten years in, I would definitely consider this iMac a successful investment, and I have no plans to replace it at this point. I hope that I can keep it running for quite some time to come, and I hope the security updates come for a while longer as well.